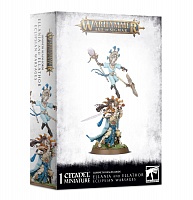 Предварительный заказ
Prodigal twins exemplifying the Teclian and Tyrionic martial philosophies favoured by the Lumineth, Ellania and Ellathor have already displayed an unrivalled level of skill despite their mere fifty years of age. Unfortunately, their meteoric rise earned them as many enemies as friends, and now they wander the Mortal Realms fighting alongside the many forces of Order in their quest to further the cause of justice and enlightenment.