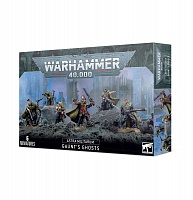 Товар на складе:
Доставка от 5 до 30 рабочих дней (Мы уточним наличие на всех складах и закажем с ближайшего)
Led by the irrepressible Colonel-Commissar Ibram Gaunt, the Tanith First and Only are a reconnaissance regiment without peer in the Astra Militarum. So named for being the only survivors of their ill-fated homeworld, the soldiers who became known as Gaunt's Ghosts are expert woodsmen marked by their distinctive camouflage cloaks, which allow them to perform feats of incredible stealth worthy of their moniker.